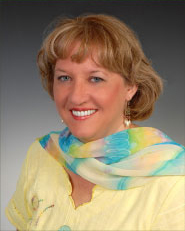 Yogita started out as Ph.D. Chemist in Germany. In 1993 she came to California to do research in her field. In 1997 she went to work for the EPA (Environmental Protection Agency) in Las Vegas, immediately after she had finished her Yoga Teacher Training at the Mount Madonna Center. By 2003 health problems had forced her to take a better look at her life situation, especially her professional career. Applying Ayurvedic principles to her diet and lifestyle helped her to regain her health and she decided in 2004 to go to Albuquerque to study with Dr. Lad at the Ayurvedic Institute and graduated from the 2 year Ayurvedic Studies Program. Yogita also joined Dr. Lad for 8 weeks in India in 2005 to deepen her studies. Since then she has been giving ayurvedic consultations and treatments (e.g. Marma point treatment, Shirodhara, Karna Purana, Kati Basti, Ayurvedic Facials). She founded “5 ELEMENTS” in January of 2007. Since spring 2008, she also works part-time as an Abhyanga Therapist at the Pancha Karma Department of the Ayurvedic Institute.

Since a lot of the Ayurvedic Treatments are based on bodywork, she decided to get licensed as a massage therapist and bodyworker. In October 2007, Yogita graduated at the New Mexico School of Natural Therapeutics to become a licensed massage therapist (LMT) and Natural Therapeutics Specialist (NTS). This school offered training not only in classic Swedish massage, but also a lot of unique healing modalities, such as Cranial Sacral work, Core Synchronism, Polarity, Chinese Medical Qi Gong, the use of western and Chinese herbs, flower remedies and essential oils in aromatherapy.

Yogita started Judith Cornell’s “Self-Healing with Mandalas” Facilitator training in February 2008. In August 2008, Yogita became a “Crystalline Consciousness Technique ™ (CCT) practitioner as well (one of the first to be trained in New Mexico!). Yogita became also a part-time provider at “UNM Center for Life” an Integrative Medicine Clinic, in June 2009, to provide massages, ayurvedic consultations and treatments, yoga classes and mandala workshops to the clinic’s patients.